E. Read the following text. Who is it about?
“Heroic Turkish Woman
“r^This person is a legendary figure in the Turkish history. She was born in Erzurum in 1857. The Ottoman Empire was on a rocky road then. It was tired after many wars. And it went through another big war against the Russians in 1877 when she was 20 years old. The soldiers in the Ottoman army fought well, but they couldn’t stop the Russian attack. The Russian soldiers were walking towards Erzurum when she decided to get into the fight.
It was 8th November 1877. Her husband was away because he was fighting on the front line. She had two little children, but she said, “They can grow up vvithout their mother, but not vvithout their motherland.” She ran to Fort Aziziye with the people of Erzurum. They didn’t feel afraid. They fought heroically and then the Russian soldiers ran away. She was one of the veterans.
She had four sons and two daughters. However, two of her sons died during the First World War. When a reporter interviewed her in 1937, everybody learned her story and after that, the Turkish people never forgot her. She got the title of the Granny of the 3rd Army in 1952.
She died in 1955 when she was 98 years old. Her mausoleum is in Fort Aziziye. You can also see her statue there. It was put up in Fort Aziziye in 2000. The Nene Hatun Historical National Park opened in Erzurum in 2009. Many people visit the park every year and remember her. Who’s this heroic woman? She’s Nene Hatun, the symbol of the brave Turkish women in wars.

F. Read the text again and fill in the timeline below with the events (a-g).
a. Turkish people learned her story with an interview.
b. She died.
c. She was born in Erzurum.
d. Her statue was put up in Fort Aziziye.
e. The Nene Hatun Historical National Park opened.
f. She fought against the Russian soldiers in Fort Aziziye.
g. She became the Granny of the 3rd Army.
G. Find these words in the text. Then use the correct words to complete the sentences. mausoleum front line veterans
1. Thousands of soldiers died on the……………………………………………….
2. The government awarded medals to the…………………………………………….. of the Civil War for their bravery.
3. A…………………………………………….is a special building that holds the dead body of an important person. 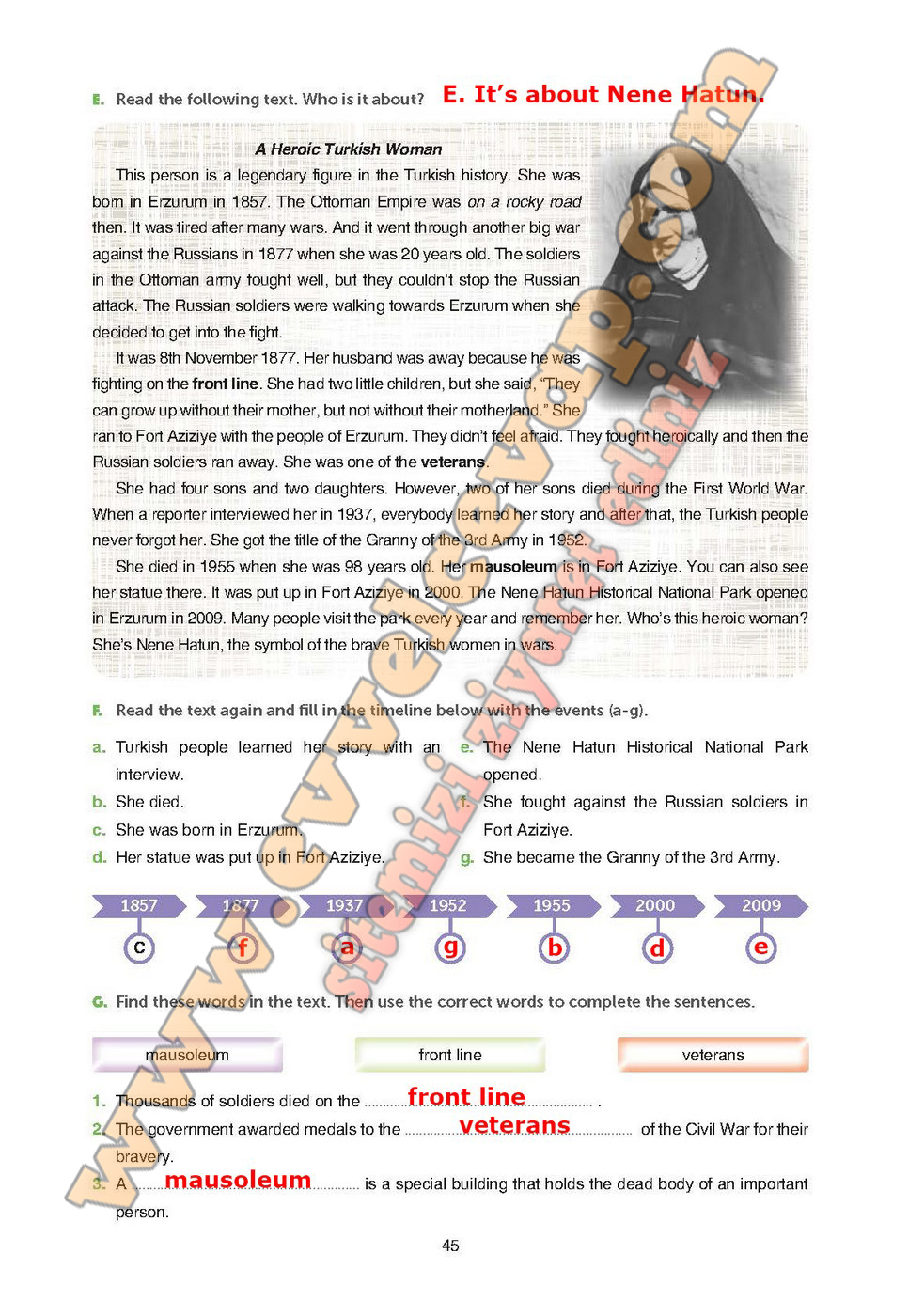