Circle the correct option to complete the sentences appropriately.

1 Comedies are films__
a about real facts, people and events, not invented stories
b intended to be funny, usually with a happy ending
c whose plots revolve around the solving of a crime
2 Thrillers are_____
a exciting films about crime or spying b especially designed to frighten people c an account of someone’s life
3 A documentary is a film_____
a about people in the west of the US in the 19th century
b which gives facts and information about something
c that employs shocking, irrational, or absurd imagery
4 A musical is a type of film_____
a including exciting and sometimes dangerous experience b about various magical creatures and imaginary places
c in which singing and dancing tell part of the story
5 Animations are_____
a films in which drawings or models of people and animals seem to be really moving
b filmic works which integrate elements of horror with fantasy
c about an imagined future, especially about space travel or other planets
6 Mysteries are films_____
a about battles or wars which can either be fictional or historical b that deal with love in a light, humorous way
c where crimes and strange events aren’t explained till the end

Complete the sentences with ‘would prefer’ or ‘would rather’.
e.g. I would rather wait outside the foyer than have to bear that awful noise.
1 Alicia__her children not to watch action films due to their violent content.
2 To be honest, I___a much more suspenseful thriller than this one.
3 They__watch the film at the cinema, but I___to watch it at home.
4 My brother___see live performances than watch their TV broadcasts.
5 I___to read the Harry Potter series rather than watch the films first.
6 We___meet the director in person than contact him by e-mail.

Fill in the blanks with the appropriate words.

1 Without doubt, the hardest thing while learning French is to__the sounds that you are not familiar with.
2 In ancient Greece and Rome, ____was a religious place such as temples where mentally ill people can have the chance to be cured.
3 The film which was inspired by his autobiography was narrated by a(n) after his death in 1965.
4 As a(n)____of his negative behaviours, all the workers of the company decided not to talk to him any more.
5 The footballer received a red card because of his______manners.
6 A person with Alzheimer’s disease may experience a(n)____in which s/he feels or acts as if an event is happening again. 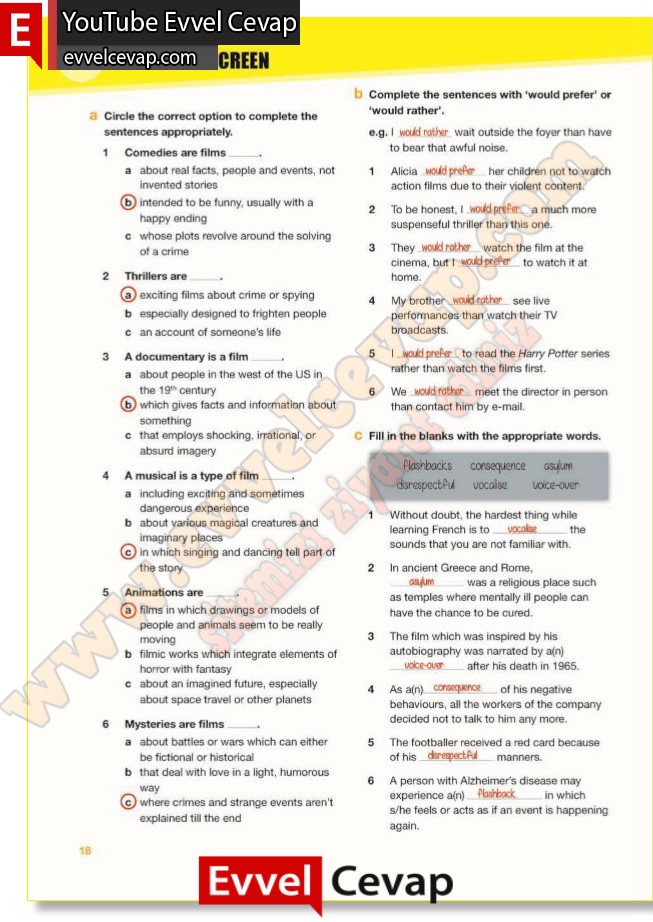