Read the passage about the traditions in the Ottoman Empire and fiil in the gaps in the diagram.

The Ottoman Empire was founded in 1299 and fell in 1923. This empire ruled for over 600 years, and during those years, its rule covered many continents including Asia, Africa and Europe. This long period played a huge role in establishing many unique Ottoman traditions.
In those years, the rich Ottoman class provided charity without embarrassing the poor people. The Ottoman people used to check if their guests were hungry. They used to serve coffee with a glass of water. When the guest drank the water before the coffee, it meant the guest was hungry, and they used to prepare a nice meal for them.
Another interesting tradition was a bunch of yellow flowers. They used to put a bunch of yellow flowers close to the houses of sick people with the belief that the people knew the necessity to keep quiet and avoid any disturbance in or around the house.

2. Read the passage again and answer the following questions.

1 It can easily be understood from the passage that in the Ottoman culture, …
a people didn’t use to give respect to the elderly.
b yellow flowers in front of a house meant there was a sick person in the house.
2 In the passage, it is clear that …
a when you saw yellow flowers in front of a house, you couldn’t make noise. b they used to prepare a meal if the guest was full.
3 According to the passage, …
a the rich people didn’t use to hurt the feelings of the poor while helping them. b some rich people used to treat the poor people badly. 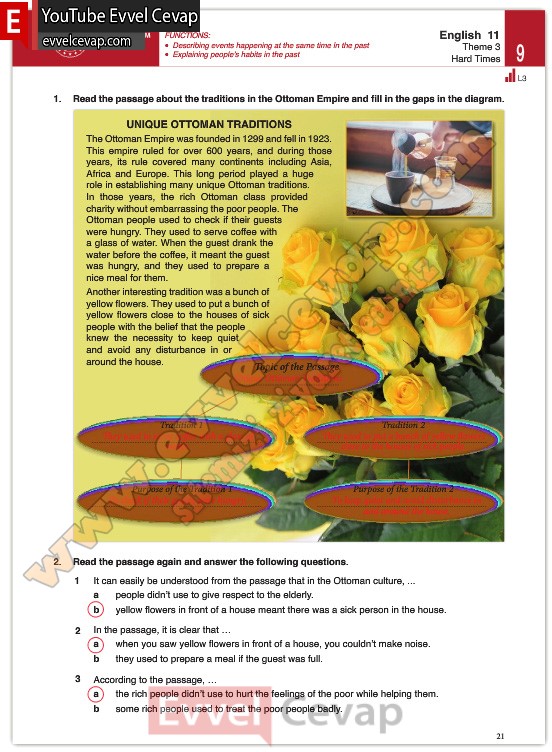