1. What are the main features of the region/city you live in? Share some facts about it with your friends.

2. Listen and answer the following questions about the interview. More than one option is possible.

3. Read the passage and answer the questions.

The Most Irrefutable Offer in Turkey:
A Glass of Tea
In Turkey, thousands of glasses of tea are drunk every day, but tea is preferred mostly as black, sweet and served in small tulip glasses. Turkish tea is not just a kind of drink; it’s a tradition that revolves around hospitality. Wherever you go in Turkey, it’s traditional to be offered a glass of Turkish tea as a sign of welcome when you’re at someone’s home or in a shop. Surprisingly, compared to tea’s history of thousands years, Turkish tea is relatively young. Some sources mention that tea was traded and consumed in 400 B.C., but it is certain that tea only became common in Turkey from the 1900s onwards. The first attempt to grow tea on Turkish soil took place in Bursa between 1888 and 1892. Unfortunately, it wasn’t a success since this part of the country is ecologically inadequate for growing tea. In 1924, a law about tea growing was passed by the government in the east of the Black Sea region. Today, 767 million m2 of land is used to grow tea, and it is the second most consumed Turkish drink after water.

1 How is tea preferred mostly in Turkey?
2 According to the author, which value is associated with serving tea?
3 Why was the attempt to grow tea in Bursa unsuccessful? 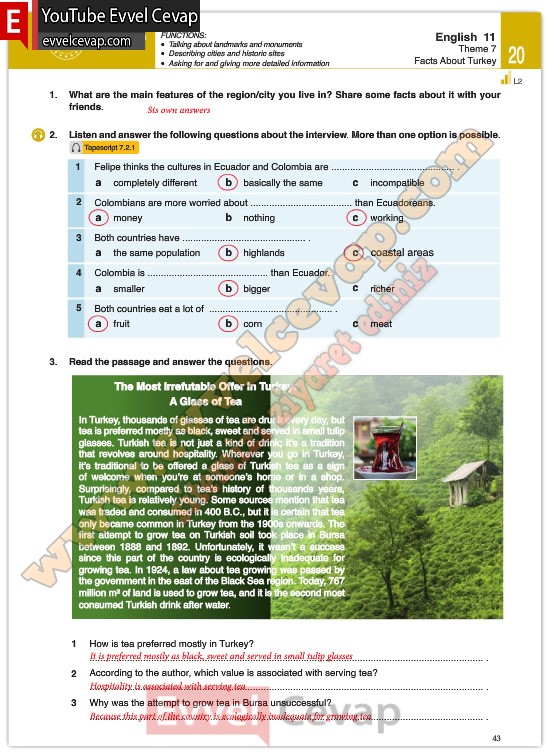