Listen to the interview and answer the questions below. Tapescript 8.2.1

1 What sport are they talking about?
a Baseball b Basketball c Volleyball
2 When was the last time he played it?
a At the age of ten b When he was in high school c Until he finished university
3 What two positions are mentioned in the dialog?
a Third base and outfield b Quarterback and running back c Guard and forward
4 Why does the man only watch the matches on TV? a He isn’t into sports anymore. b He doesn’t have any time nowadays. c There aren’t many opportunities around.

2. Make an interview with your family members and ask about their favorite sports. Then, share it with your friends.

3. Read the page on newspaper and number the scrambled paragraphs in the right order.

A …………(a) The coach of the team told us “Without dynamic body and strong maneuvers in water, the players can’t break down the defensive1 formations of the opponent team.” Then, we asked one of the players about water polo2. (b) He stated “I love competitive sports and I like being part of a team.” As for me, (c) I really enjoyed having this interview with that young sportsman. Today’s last words are such that: water polo is fun and competitive, so don’t lose time to meet this sport!

B ……… … Water polo is a new sport at the youth center of our town. Although it’s new, the center has already had a good team. The players of the team practice everyday at the Eastside Pool and they’re doing well in the National Youth Services Competition that is held annually3.

C …………Water polo is defined as a game played in water in which two teams try to get the
ball into the goal of the opponent4 team. Each team consists of seven players including a goalkeeper and all play without their feet ever touching the bottom. We can think that the game is a bit like football because each team tries to score5 goals with a ball. However, in water polo, you don’t use your feet-you catch and throw the ball with one hand. A game consists of four quarters, each of which lasts eight minutes. 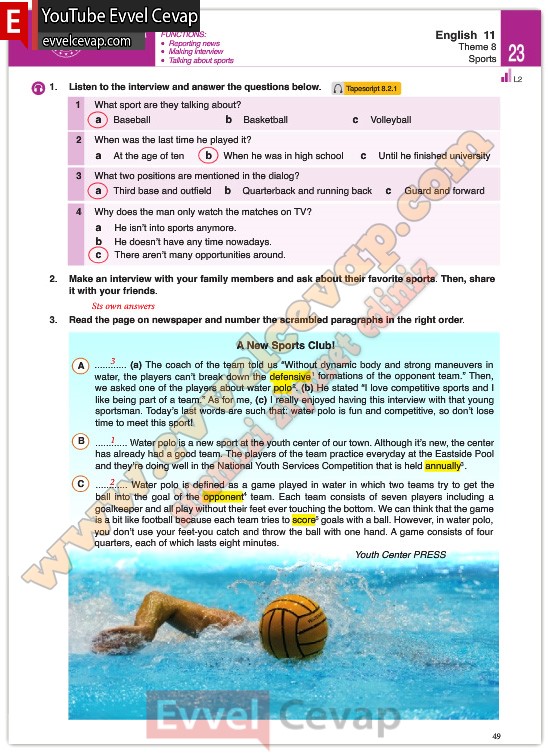