Read the news story and circle the correct option.

For a teenager in Colombia in the 1980s, a science career in NASA seemed like landing on a distant planet. However, Diana Trujillo went further from modestly dreaming about the cosmos to actually exploring it. That’s a tale of determination which was written in heavens.
Born and raised in Colombia, Diana was certain of her ardor for science. Yet, she had no idea about how far she’d be able to go in that sophisticated field. Meanwhile, destiny stepped in when her father suggested sending

At the age of 17, Diana immigrated to the US in the early 2000s, with only $300 in her pocket, to pursue her dream of working for NASA. She enrolled in English courses, worked at full-time jobs as a housekeeper and a fast-food service worker to support her studies in college, and later at the University of Florida. Nevertheless, it wasn’t easy. Most of the times, she had to change buses just to get to classes and other days she was cleaning bathrooms to help pay her tuition.
Ensuingly, another life-altering moment came for Diana. She became the first Hispanic woman to be admitted to the NASA Academy. She did so well that she received a job offer from the prestigious institution. While at the NASA Academy, she was invited to join the NASA Space Robotics Research Team at the University of Maryland, where she earned her bachelor’s degree in

Diana Trujillo is currently an aerospace engineer at NASA’s Jet Propulsion Laboratory. There, she is leading a 45-person team that is responsible for the robotic arm of the latest Mars rover.

1 Before/After she immigrated to the US, Diana wasn’t sure how far she could go in science.
2 Luckily/Unfortunately, she didn’t have enough savings while immigrating to the US.
3 First/Also, she enrolled in English courses when she came to the US.
4 Before/Then, she continued her education in college and later at the University of Florida.
5 Definitely/In contrast, her admission to the NASA Academy has been a turning point in her life.
6 Secondly/Finally, she became the team leader of the robotic arm of the latest Mars rover.

5. Read again and fiil in the table with a list of key words or expressions special to each part of the story.

Write a news story, a past experience or an imaginative story following the steps and the plan below.

When and where did it take place?
What was happening?
Who was there?
What happened in the end? 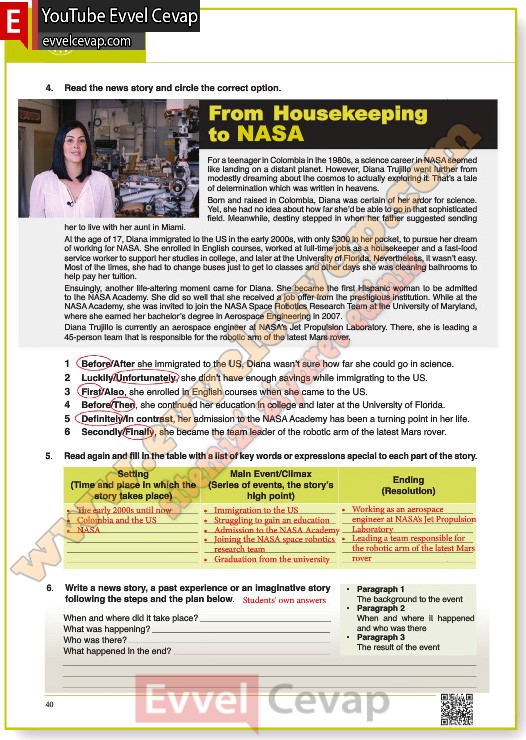