Read the interview and write true (T), false (F) or not stated (NS).

Interviewer: Today, we’re here to interview with an automobile designer, Arvid Olsen from
Norway. Can you introduce yourself to us, please?
Mr. Olsen: I’m a 57-year-old mechanical engineer. After the university, I got my Ph.D. in the same field, and I’ve been designing cars since then. I worked with one of the biggest companies’ F1 racing-design crew in the 1990s and pioneered the use of magnesium in pistons.
Interviewer: If I’m not mistaken, you were given an award for your pioneering by your company.
Mr. Olsen: Oh, yes! You remember it.
Interviewer: I do. Now, please let us know about your environmentally-friendly aircar. Concept cars, especially the green ones, grab public’s attention.
Mr. Olsen: You know fuels are very polluting. Petrol is the worst. A mixture of battery power and petrol is slightly cleaner. Hydrogen is very expensive, and electric cars rely on inefficient battery power. My car just runs on air. So simple.
Interviewer: Can you tell us its principle?
Mr. Olsen: Briefly, the electricity is transmitted to a compressor, which mechanically compresses the air into the car’s tank. The car’s engine then converts the compressed air into mechanical energy.
Interviewer: So, can we say an aircar is cheaper than an electric car, doesn’t have batteries that need replacing every five years, and is much quicker to recharge with clean energy?

Mr. Olsen: Exactly.
Interviewer: What about its speed?
Mr. Olsen: Actually, it can only reach speeds of 60 km/h at the moment.
Interviewer: Then, available just for short journeys where high speeds are not necessary.
Mr. Olsen: You know my car hasn’t been seen on the roads yet. It has to be remembered that this is just a test car yet. There are still some problems to overcome before my dream becomes a reality.
Interviewer: You’re being modest. We know that a big airline company is interested in your aircar. What can you say about that?
Mr. Olsen: Ha ha ha! You don’t miss any detail. Yes, that’s right. One of the biggest airline companies wanted to use the aircars to replace their electric cars at Budapest Ferenc Liszt International Airport.
Interviewer: Great! As far as I know, you are working on another type of car at the moment. What would you like to say about it?
Mr. Olsen: It’s a car which combines both air and petrol power. This car will be ultraefficient and be able to travel hundreds of kilometers on one liter of petrol.
Interviewer: You mean if the pump for the air is powered by clean energy, then the car will be 100% pollution-free. Even if its performance is improved by using petrol, it’ll still be less polluting than most cars.
Mr. Olsen: Definitely.
Interviewer: Breathtaking. Thank you so much, Mr. Olsen.
Mr. Olsen: My pleasure.

1 The interviewer had Arvid Olsen talk about his aircar.
2 Mr. Olsen has been designing cars since he started university.
3 His crew in the 1990s took the lead in using magnesium in pistons.
4 His company rewarded him with a huge amount of money.
5 People would like to see environmentally-friendly aircars around.

6 He has lots of experience in working with hydrogen power.
7 Aircar is a vehicle that uses a motor powered by compressed air.
8 You can easily drive at a high speed if you have an aircar.
9 He let an airline company use the aircars at Budapest Airport.

• Search for a person who is an innovator in technology.
• Prepare your questions.
• Ask and answer.
• Write your interview.
• Present it in the class 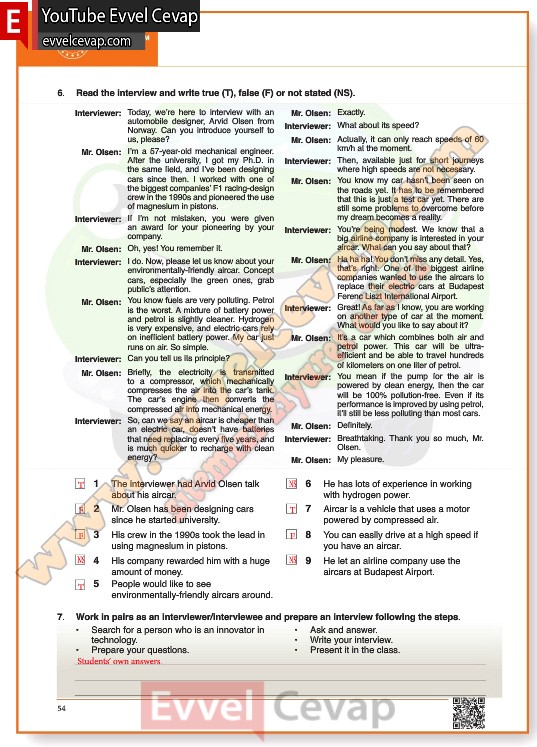