Read and complete the text with the six-word stories below.

a “Not quite what I was planning.” b “Shared a story, changed the world.” c “For sale: baby shoes, never worn.”
H0W MHY W0m ARE HEEPEP TC TELL M S
If you were told to tell a story in six words, what would you say? Probably, you would say; ‘No way!’ However, it is claimed that the famous American author Ernest Hemingway did it. In the 1920s, he bet ten dollars that he could write a complete story that could make people cry in just six words. To the astonishment of his friends, he won the bet by writing the shortest story in the world: (1)___
In 2006, inspired by this anecdote, Smith Online Magazine asked its readers to write a story in just six words and published a book named after one of the submissions telling about the common disappointment in life: (2)
However, so many people took up the challenge that the editors of the magazine had to work on a second collection of six-word stories. Then, Larry Smith, the founder of the magazine, started the Six-Word Memoir Project as he was on a quest to help other people tell their stories. Nowadays, his project has become an inspirational and addictive form of self-expression embraced by lots of people of all ages around the world. Thus, more than 1 million Six-Word Memoirs have been shared across Smith Magazine sites, and his project can be found in classrooms, hospitals, prisons, etc. The project is also used in therapy groups as stories are deceptively simple and surprisingly powerful. Sharing regrets and disappointments heals people. Therefore, Larry Smith keeps telling about his project in various educational events and invites people to write their life stories. He finishes his talks with his own six-word story: (3)

2. Read the text again and circle the correct option.

1 Hemingway’s story tells about a heartbreaking loss/dramatic change.
2 The readers took/ignored the six-word challenge seriously.
3 The name of the first six-word book had a sense of satisfaction/dissatisfaction.
4 Larry Smith’s six-word challenge turned into a success/failure story.
5 Stories have strong positive/negative effects on human psychology.
6 Larry Smith believes that stories will unfortunately/incredibly change the world.

3. Below are some of the six-word life stories sent to Smith Magazine. Read and discuss what the writers would change if they had a chance.

a I wish I could turn back and try it all once more.
b I wish I weren’t so anxious about time
c If only I had chosen the right profession for me.
4 Really should have been a lawyer.
5 Born London, lived elsewhere, died inside.
6 Any chance I could start again?
d If only I hadn’t missed the love of my life.
e I wish I hadn’t ruined my life talking inside.
f If only I’d been born in a different time under different circumstances.

5. Now, it is your turn for your tiny stories. Write your life story in six words. 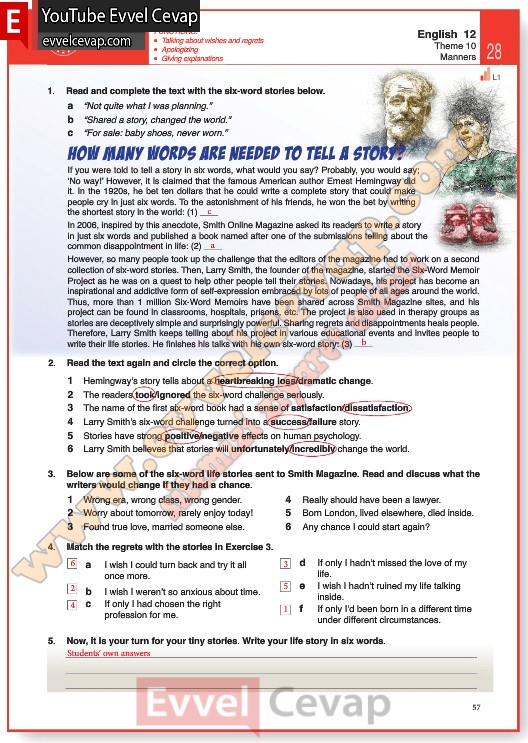