Read the text and choose the correct option to complete the sentences.

We all make mistakes and thus feel sorry for the consequences of our decisions. We wish that things could have been different in the past, but we cannot change the reality of the present. Most of us think that we should have studied more, traveled more, saved more money, found a better job, or we wish we wouldn’t have said those words or hadn’t worked so hard, and the list of regrets goes on. However, if we take a look at the amazing history, we witness bigger regrets which changed the destiny of nations. There are things in life even the most famous scientists wish they hadn’t discovered or invented anything.

“If only I had known that the Germans would not succeed in producing an atomic bomb, then I would have never lifted a finger,” said Einstein regretfully. Although Einstein vvasn’t involved in the creation of the atomic bomb, he felt remorse due to his role in encouraging its development. He was so fearful with the idea that Germany was attempting to create nuclear weapons to use against the World War II Allies; therefore, he sent an urgent letter to President Franklin Roosevelt both informing and encouraging him to support the U.S. research into producing one. But after he had witnessed the devastation of Hiroshima and Nagasaki, he publicly shared his deep sorrow.

Alfred Nobel, the Swedish inventor of dynamite hoped that his invention would only be used for peace-time industries, however, he witnessed people misuse his creation as a weapon of war. He was frustrated with this unpleasant result, but he didn’t let this situation get him down. He was determined to create one of the world’s most prestigious international prizes. “I wish I weren’t remembered for my invention”, were the words of Alfred Nobel before writing his last will and testament. Alfred Nobel had no family of his own. In his will, he wrote that his fortune should be invested to form a fund, and every year the interest of this fund should be given to the people who did outstanding work for humanity in the fields of physics, chemistry, medicine, literature and peace, and this is called the Nobel Prize.

a most of us feel sorry for some of the decisions we made in the past b we still have a chance to change the
results of our actions that we regret 5
2 Einstein felt sorry for
a helping the Germans to create a nuclear weapon
b sending a letter to the U.S. president
3 Although Einstein didn’t work directly on the atomic bomb,
a he expressed his regret openly after the disaster in Japan
b he felt deep sorrow for the Germans’ attack

Read again and choose a suitable title for the text.

Write a paragraph about telling something you regret in the past.

• Think of something you regret and write why you regret this by using the phrases below. If only…/I wish I hadn’t…/I should have… 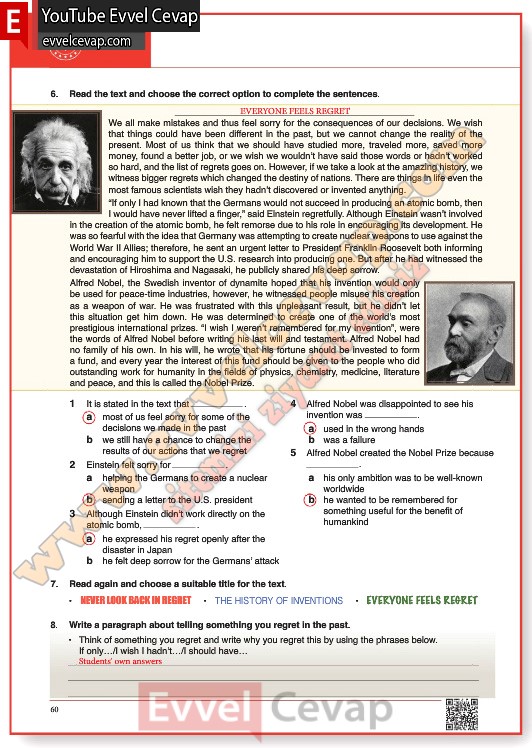