Although it has always been celebrated as a traditional festival for many years, people from all over the world have begun to come and join the celebrations as a touristic event in recent years. Boryeong Mud Festival 2 Boryeong Mud Festival has been celebrated as an annual festival since 1998 in Boryeong, South Korea. It lasts about two weeks and the last week is famous for its final weekend. Actually, it began as a promotion of cosmetics companies using mud in their products. It turned into a festival afterwards. People get together on the Daecheon beach full of mud, which is trucked the day before the festival starts. Mud pools, mud slides, mud prisons, mud skiing competitions… There are many events for people who want to lose themselves in mud. There is also coloured mud for body painting. Besides having fun, companies also want people to learn the benefits of mud when it is used in skincare products. However, some people have allergies after the festival because of their sensitive skin. Though it is a local festival, it also attracts visitors from all over the world. Last year, more than two million people joined it, which means double of the Boryeong’s own population. Giant Omelette Festival  Giant Omelette Festival is a traditional celebration in Bessieres, France. According to the legend, Napoleon was travelling through the South of France with his army and decided to stay for the night in Bessieres. He was served an omelette and he got delighted with the taste of it. He told the cook to collect all the eggs in the village and prepare a huge omelette for his army the next day. The soldiers and the people of the village ate that huge omelette altogether. Since that day, it has turned into a traditional celebration to feed the poor of the village. Every year at Easter, very famous cooks who come from various countries around the world, scramble approximately five thousand eggs in a huge pan. The giant omelette is served to the people and the children of Bessieres. Besides being a festival, it has also become the symbol of a worldwide friendship and cultural exchange.

d. Answer the questions according to the paragraphs.

1. What does Holi Festival aim to create?
2. What are the religious sides of Holi Festival?
3. What is Boryeong Mud Festival famous for?
4. What do the cosmetic companies want people to learn?
5. Why did Napoleon tell the cook to collect all the eggs in the village?
6. What does Giant Omelette Festival symbolise?

e. Match the words to their definitions below. 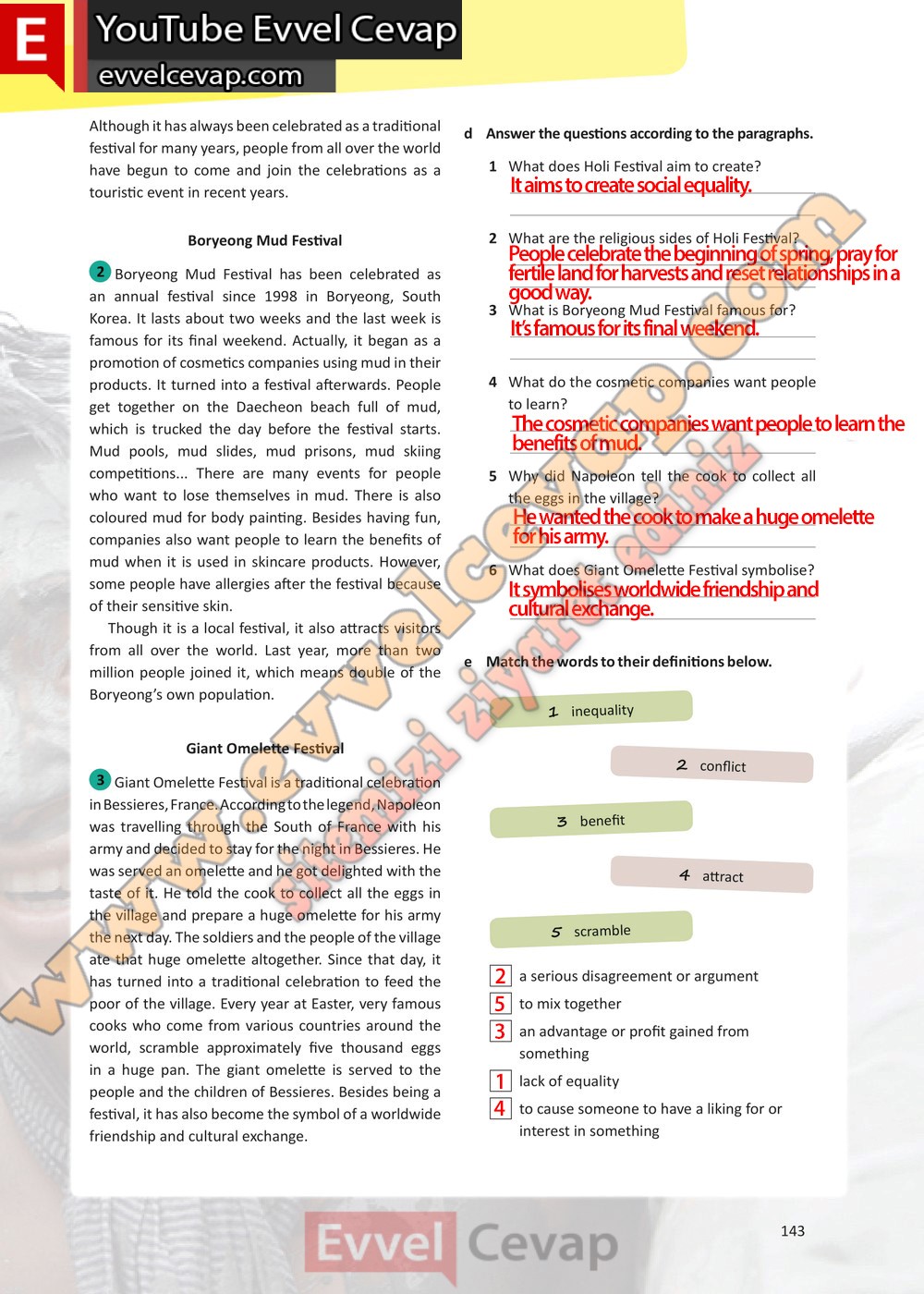