Read the first newspaper extract below and complete the second with the required info.

Read the story behind the Magic Bus and answer the questions.

ONLY REAL WHEN SHARED

Bus 142, known as The Magic Bus, has received international attention since Christopher McCandless’s body was discovered inside in 1992. Then, with the book Into the Wildby Jon Krakauer in 1997 and its film adaptation in 2007, McCandless’s story has become a modern myth. As you know, McCandless was a talented young man who had a well-to-do family and a bright future ahead. One day, he told his parents that he wanted to spend the summer traveling in his car. In fact, he left his family and friends behind to vanish into the wild. He donated all his money, left his car and went on his solo adventure by hitchhiking to his dreamland, Alaska. He reached there one year later and started to live in an abandoned bus in the wild.
Four months later, he decided to turn back and took the trail from Bus 142 to the main park entrance. However, he discovered the Teklanika River had turned into a raging torrent with glacier melt, and it was completely uncrossable. Therefore, he went back to the bus and decided to wait until the water would decrease. Unfortunately, Chris did not realize that there was another way across the river.

If he had traveled upstream, he would have seen better options ahead. If he had been a more experienced hiker, he would have also known to try to traverse the river in the morning when the vvater reaches its lovvest point.

Many believe that McCandless’s story is not about a man who died, but about someone who truly lived. Therefore, the bus had been a magnet for those who search for themselves and pursue dreams of freedom out there in the wilderness, till the time it was moved away. Hikers risked their lives crossing the dangerous river to reach the bus. One of them once said, “The bus is where McCandless’s journey ended, and the rest of ours begins.”

1 What is the book or the movie Into the Wild about?
2 Where did McCandless want to go?
3 Why couldn’t he return?
4 Why did people risk their lives to see the bus?
5 Why did Chris’s sister leave a notebook in the bus?

7. Considering the true story of Christopher, write your thoughts and ideas on how you feel about his extraordinary experience. 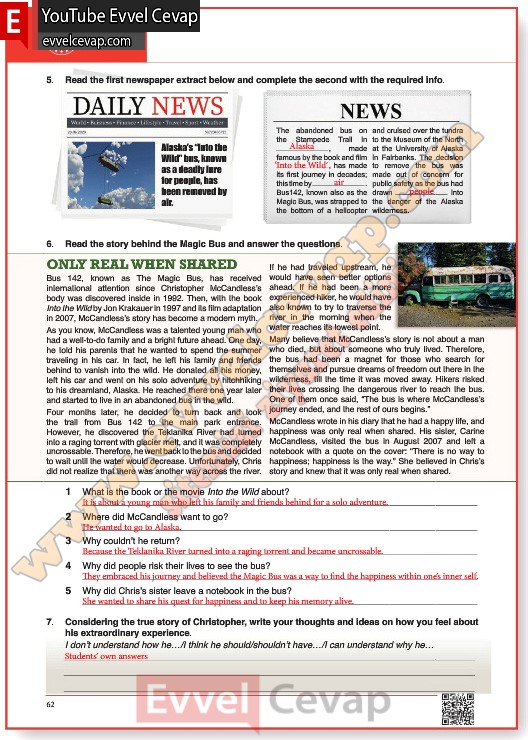